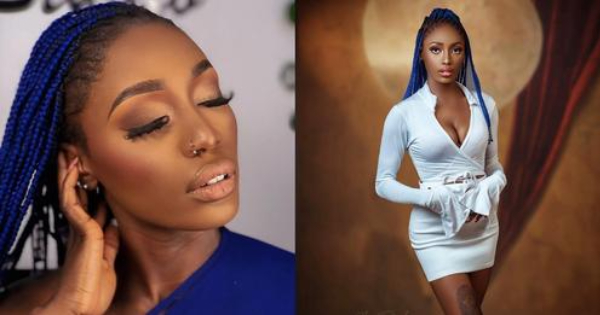 Big Brother Titans housemate, Nana, has shared a heartbreaking story about how she became a 300-level drop out due to a lack of support from her family members.

The 22-year-old said so on Tuesday, January 17th, while chatting with her fellow housemates. According to Nana, her father never believed in her and called her a mistake.

“I was in 300 level when I had to drop out. I cried a lot coz of this. This made me go through a lot. I had to take care of myself.

I don’t owe my mum anything cos I was in the street way too early, bringing things home, she never asked me how or where I got them from. My father has never been proud of me. Uttering a statement like I’m a mistake,” she said.

Nana went further and revealed that she was once pregnant without her knowledge and shared her horrible experience.

“I was six months pregnant and didn’t know. I didn’t go for antenatal. The baby died and was decaying in me. My aunt took me to the hospital and lied that I had an infection. I was relaxed, my mom said I passed out five times. I don’t know how the doctors did it that my womb is still intact. I have to do a lot of dirty and nasty things because of my parents’ negligence. I dropped out from school in 300 level because there was no one to train me.”

Listen to her speak below;