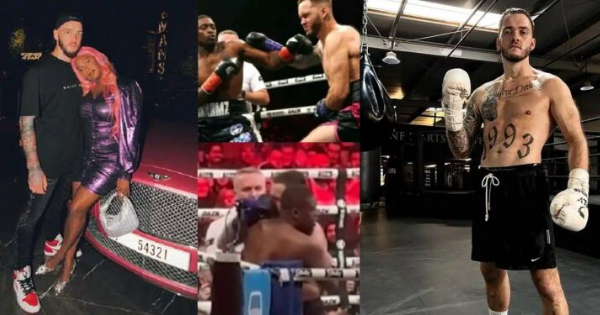 Ryan Taylor, the boxing fiancé of billionaire heiress, DJ Cuppy, has drawn mixed reactions after quitting a boxing match in the first round due to a punch in the eye from his opponent. However, the fight ended unexpectedly after Swarmz landed a punch on Ryan Taylor just 30 seconds into the match.

Ryan took to his Instagram Story to explain why he quit the match, noting the blow hit his eyeball, which immediately caused him to lose his sight.

“The glove caught my fucking eyeball. I can’t see shit. Mad …,” he wrote while adding a laughing emoji. However, the fight drew mixed reactions from Nigerians on social media who had a thing or two to say about the match.

In response, an Instagram follower wrote, “Wey he reason how many billions Otedola worth my guy no wan die ooo wey him in law get money

Another user added, “Is the hot punch for me

See more reactions as you scroll. Watch the full highlight of the match below.