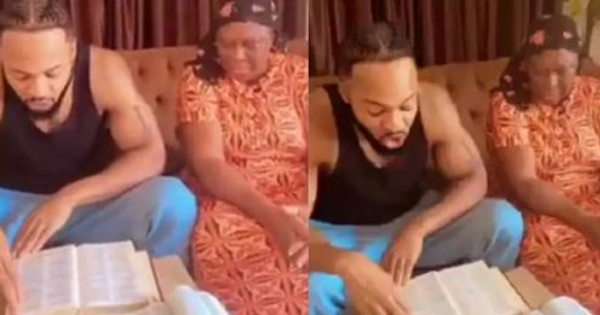 Popular Nigerian singer, Chinedu Izuchukwu Okoli, better known as Flavour, has melted hearts online with a video of his recent visit to his mother.

The superstar singer recently visited his mother and posted beautiful moments from the visit on his respective social media pages. 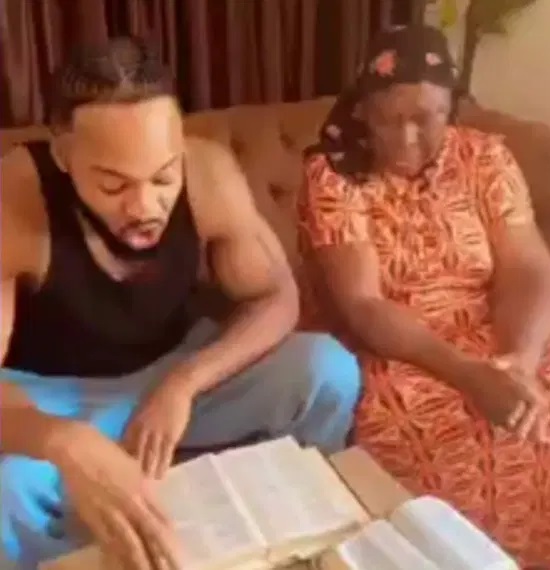 Taking to his Facebook page, Flavour shared a video of him reading a Bible verse to his mother during their family devotion.

The ‘Ada Ada’ star read Psalm 35 from the Bible with apparent concentration while his mother was caught intently saying ‘Amen’ to the Bible verse’s powerful proclamations.

As they rounded up the prayers, the sensational singer assured his mother that he would study the same Bible verse when he gets home.

Watch the heartwarming video below,

In other news, a trending video of famous Nigerian singer and songwriter, Flavor and his adopted son, Semah has melted hearts on social media.The “Game Changer” singer took to his official Instagram page to share the video, which captured the heartwarming moment as he was reunited with his adopted son, Semah.

The visually impaired Liberian singer, whom the singer adopted as a boy years ago, has grown into a handsome young man and it was indeed a beautiful sight to see them reunited.

In the video, Semah touched and caressed Flavor’s face as they hugged. However, the reunion sent Semah into an emotional frenzy as he was captured shedding tears while Flavor patted him on the back. (Watch the emotional video here)