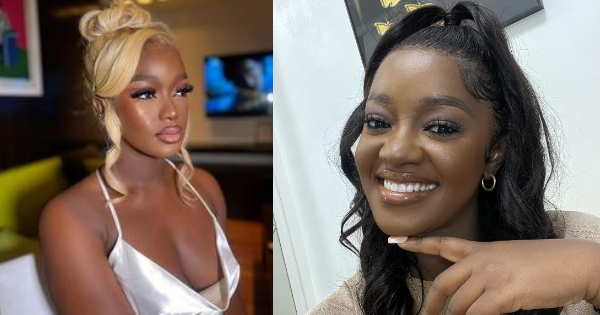 Nollywood actress, Luchy Donalds, has taken to social media to reach out to her friend who falsely collected money from her and used it for cosmetic surgery instead.

The actress shared full details on her official Instagram page of how her anonymous friend came to fundraise, claiming her mother needed a kidney transplant and she was pressured into helping her despite not having a lot. 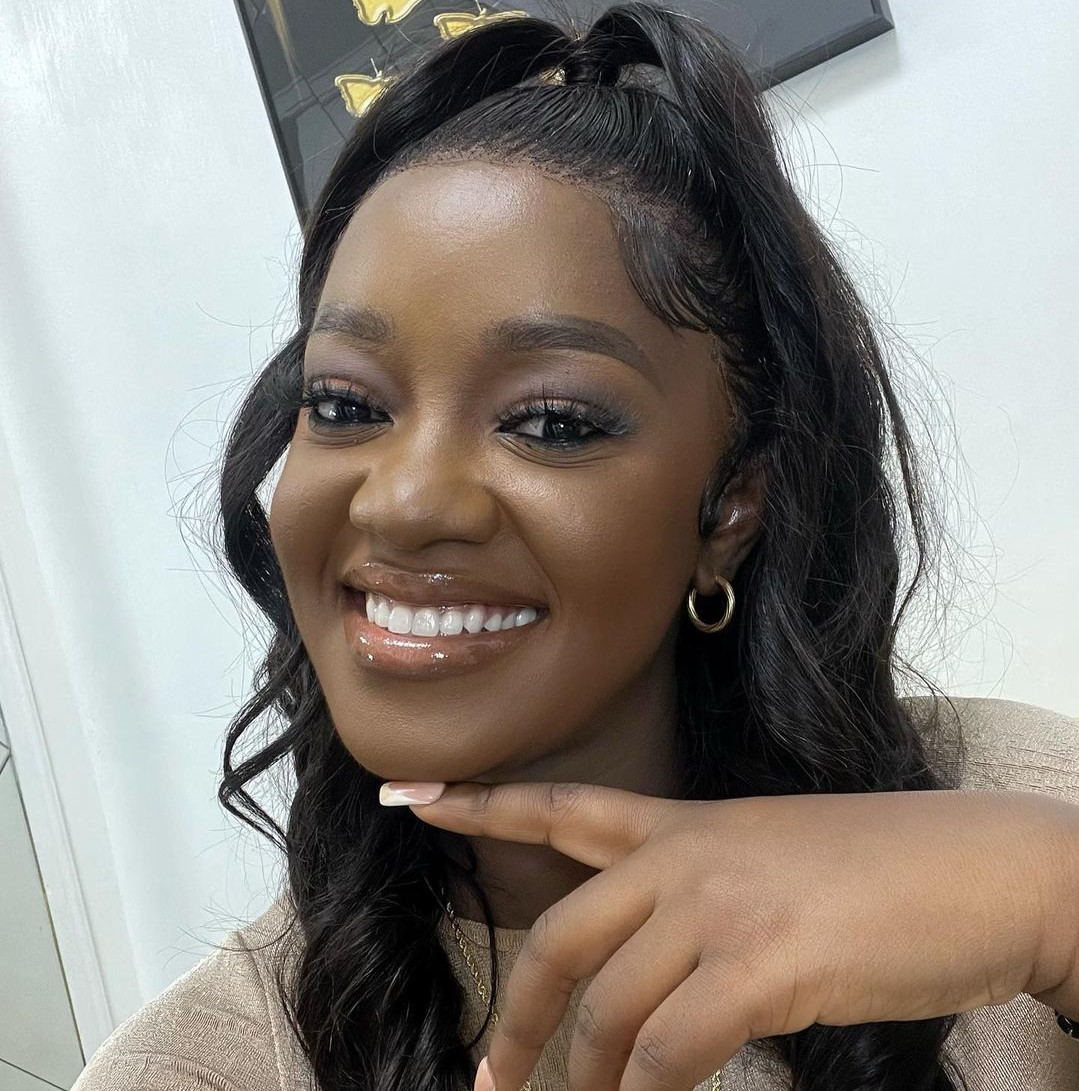 Luchy Donalds also shared an audio recording of the friend begging for the loan and swearing on her mother’s life on her social media page.

She revealed that the friend also stayed in her house and stole $2,000 from her, and she forgave her because they were “friends.”

“People are very very very wicked, this particular one really hurt me. My friend since year 1 in the university called me crying that her mother has kidney problems and needs a transplant, weeping that her mother does not even recognize her again because of how bad her condition has become, I asked this girl how much did they hospital ask for the transplant, she said 7.5million naira but she has raised 6million remaining 1.5million so I told her she will hear from me, not upto 30minutes I got off the phone with her, I sent her the complete 1.5million naira to save her mothers life.

Now here’s the painful thing
1 just found out that this girl used my money to go and do body surgery for her ass and arms, I don’t have too much money but the little I have I came through for a friend to save her supposed mothers life only to realize she played me, she used my as her local client because this is jobing that she jobed me, now here’s another painful part again.

This girl in question while she was living in my house 4 or 5 years ago stole $2,000 (two thousand dollars) from me, she went to my handbag and stole it but yet after a while I forgave her, 3 years ago she started one business and I still patronized her and even advertised it on my page for her for free, this same girl once in a while I dash her some money, each time I traveled out I buy her something
1 am so0000 hurt, I keep asking myself do I deserve this continuous wickedness??????

I called her yesterday and asked her if she did her body she started lying to me but her
closest friend told me and I also have videos and pictures but i won’t post them and i won’t put her name out for the sake of God.
Her friend that was with her that day was recording her when she called and was lying with her mother’s life, slide to listen to the voice note
This happened on 25th of november when people were busy saving money for christmas, i took my own money to save a friend’s moms life.

I always help people on a very low key off social media but is this evil act not discouraging?? can I easily believe such stories from anyone again?? if my own friend can job me then who wouldn’t want to job me. Lying with her mother’s life who single handly raised her after the death of her father when she was only fifteen years old just to do surgery body.
This is for everyone to stay woke, these girls can go any length just to do body if you don’t have money for body, rest until you get the money naaa that is if you must do your body I am sooooo hurt.
life.” 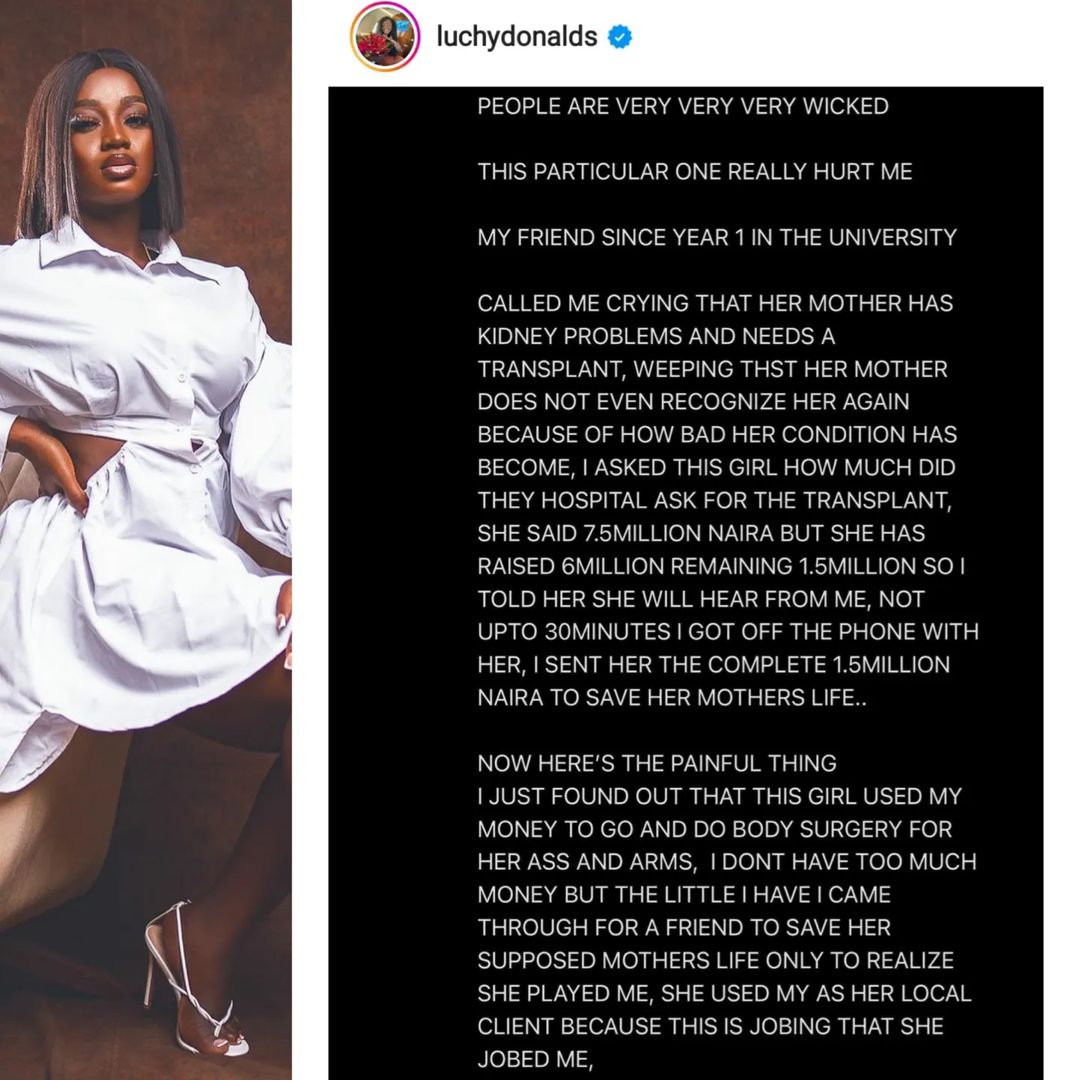 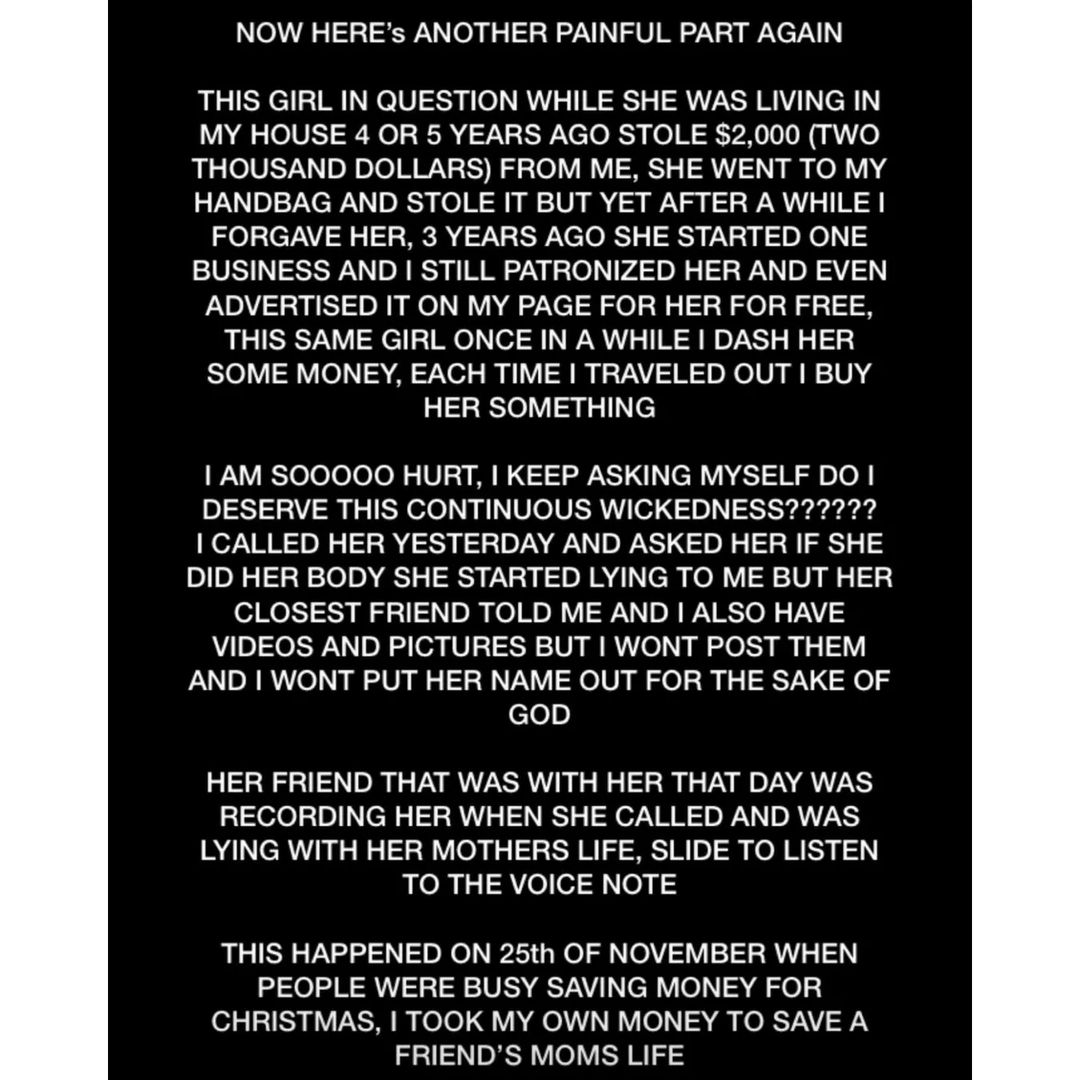 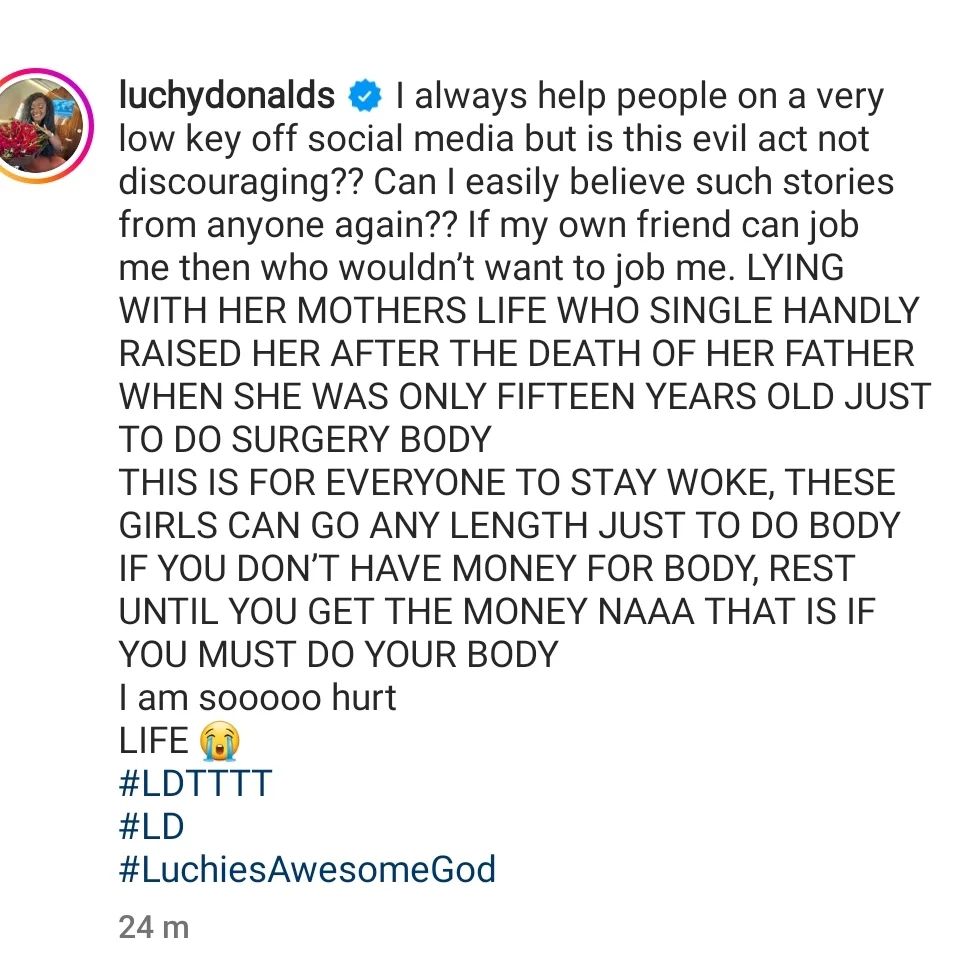 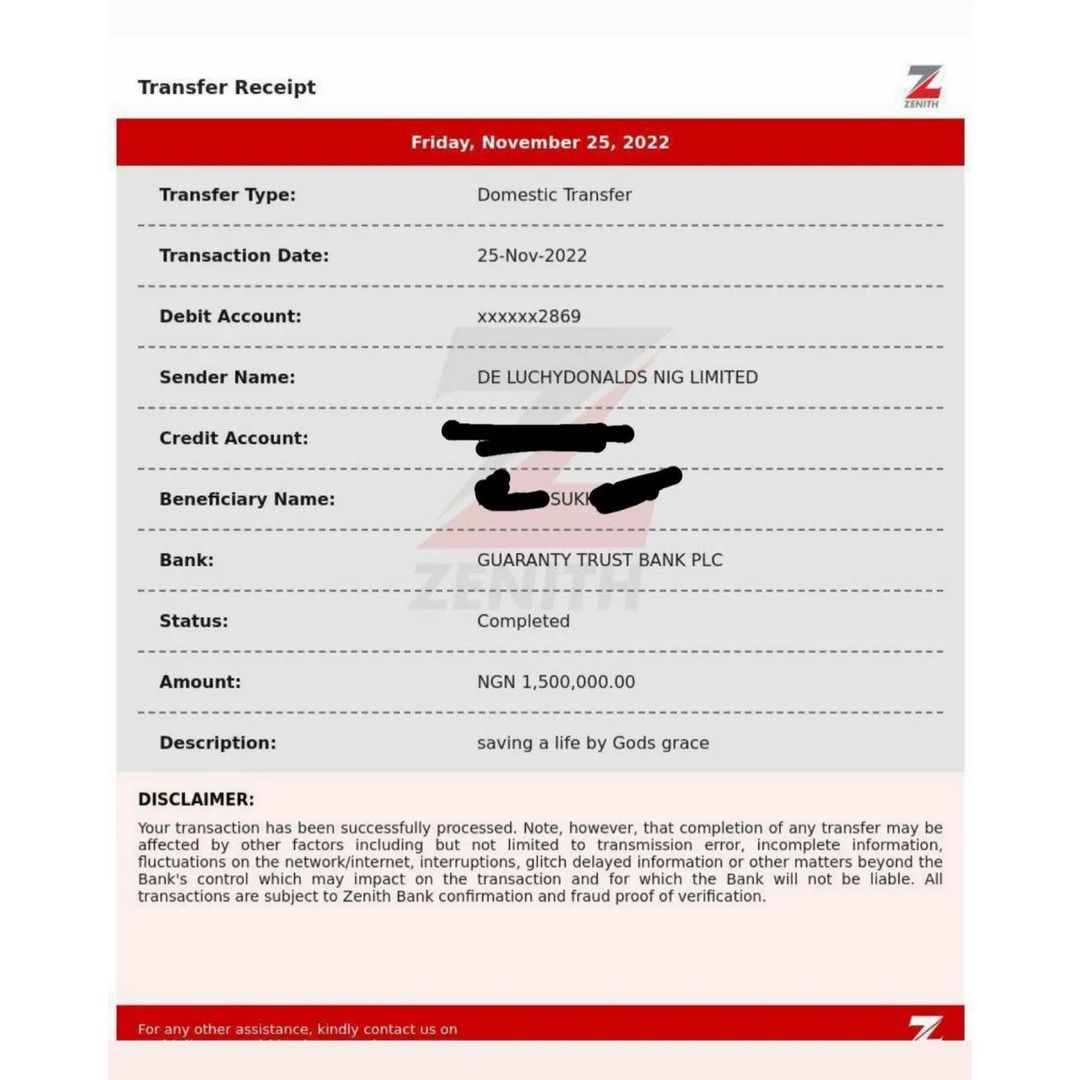 Listen to the message below;