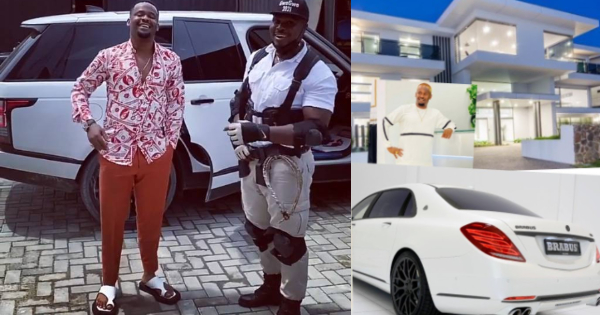 Nollywood actor, Zubby Michael is no foreign name to as many who are acquainted with Nigerian home videos, it is one name that rings a bell when you talk about Nigerian epic movies in recent times.

The Nollywood actor has shown over time that he is one of the best in the industry and a favorite of many producers because of his unique style. He is known for playing lover boy, villain, gangster, royal prince, and many other roles in movies.

Azubuike Michael Egwu popularly known as Zubby Michael is a professional Nigerian-based actor, model, TV personality, and movie producer who has actively been in the Nigerian entertainment industry for over two decades and has over time become very famous. He is a model, an entrepreneur, and also a television personality who is very successful at his craft.

Zubby Michael was born on February 1st, 1985, and hails from Ekwusigo Local government area, Anambra State, Nigeria. He grew up in Adamawa State, Nigeria, where he finished his basic and senior secondary education. He, therefore, attained both his school leaving certificate and West African Senior school Certificate(WASSCE). Thereupon, he obtained his Bachelor’s degree (B.sc) in Mass Communication at the Nnamdi Azikwe University (UNIZIK), Enugu State, Nigeria. After this, he started venturing into business before his official acting career started.

Zubby Michael’s career in the movie industry began at the age of 8 when he performed in a children’s stage drama, but he was first featured in a movie titled ‘missing rib‘ after he acquired his first degree and returned to Adamawa State.

His first big break in the Nigerian movie industry happened when he starred in a movie titled ‘The three widows‘ as a major character alongside popular Nollywood actress, Oge Okoye in 2006. His remarkable performance made him the main target of many producers and directors. Thereon, he became a force to reckon with in the movie industry and has been featured in over 150 other home videos such as The killer’, ‘Stolen love’, ‘Royal storm’, ‘The Generals,  and many other movies over the years.

Zubby Michael is also known for his great work behind the scenes as a producer and a director of Nigerian home videos. He has directed and produced quite a good amount of movies that have been of great impact on the movie industry. His very first movie production, titled “First Hit”, featured some Nollywood stars such as Junior Pope, Ebere Okaro, and Nonso Diobi.

Zubby Michael is the second of six children of his parents Mr. And Mrs. Egwu including 3 girls and 2 boys. His father is a civil servant while his mum is also an actress. Both parents are based in Awka, Anambra State, Nigeria. Zubby Michael has a younger brother called Chris, who is often mistaken to be his twin is most times considered as such with his younger brother Chris Egwu because they both have a striking resemblance. Chris Egwu unlike his brother does not fancy the movie industry like his brother, rather loves football and looks forward to becoming a professional footballer.

Zubby Michael is currently unmarried(single) and has a son which he adopted. He was however involved in a romantic relationship with Mary Okoye, the younger sister of the popular Peter and Paul Okoye formerly known as the defunct music group PSquare. The romance between them however came to an end when Zubby Michael called it a quit, saying that he was not yet ready to settle down and had a lot more to accomplish in the nearest future.

Zubby Michael is an actor but also a movie producer, scriptwriter, model, TV personality, and entrepreneur, he has also delved into politics with his appointment as the adviser on media to Willie Obiano (Governor) in Anambra state. These several stances have contributed immensely making him one of the most influential and richest actors in the Nigerian movie industry, especially in the Eastern part of the country.

He is also in partnership with several brands and endorsed by companies which with extra cash privileges. As of 2021, he has an estimated net worth of three hundred and six million Naira (#306 million) equivalent to about eight hundred thousand dollars ($800000). He is currently one of the highest-paid actors presently, he reportedly receives nothing less than half a million for an appearance in a particular movie because of his major roles and prowess which he has shown over the years in the movie industry.

He is a young man with a tremendous taste for automobiles and his collection reflects that. He is an actor and also a politician of high reputation and social status and sometimes he has to look that part. Also to make mobility easier, especially for long distances. He is also capable of affording as many cars as he wants depending on his financial capacity.

After Zubby’s first breakthrough in 2006, the first car he purchased was a Toyota Camry, but over time as he continued to excel in the movie industry his style and love for cars continued to grow.

As of now, the actor has acquired four different luxurious cars for himself which depict his style and status, and they are:

The Range Rover SUV, however, came as a birthday gift to him in February 2015.

Where Is Zubby Michael’s House Located?

As of 2018, the actor Zubby Michael built a very big luxurious mansion in Delta State, Asaba which cost hundreds of millions. While in 2020 the actor bought a new house worth over #600 million located in Lekki, Lagos, Nigeria.

The Lekki mansion is magnificent and has a beautiful look from its exterior, with cold grey walls and large white windows. The compound is surrounded by tall big trees making it difficult to have a good view of the compound.

This goes a long way to show the actor’s affection and love for luxury and at the same time makes good use of his fortune.

In addition, to money from his lead roles, Zubby has exciting and lucrative endorsement deals and partnerships with top brands and companies which is of great income to him. Zubby has proven to be a great influence on many, especially through social media platforms and this is of great importance in promoting the products and services of several brands. They are various labels the actor is promoting through different social media platforms, some of the popular brands include;

He is also a brand ambassador for splendid furniture, through which he earned #10 million Naira doing commercials.

The popular actor Zubby Michael is a great actor and entrepreneur who is successful at his game but also a man with a large heart. He has been of help to many young ones and has shown great compassion towards many as he does a lot to put a smile on the faces of the needy. Millions have been contributed by him to help uplift others, and provide for people in distress.

During the fire incident at Ochanga market, many who lost goods and properties to the gasoline fire that engulfed the market in Anambra State were assisted. The incident occurred when a tank containing gasoline exploded, and flames ravaged the market as goods and properties worth millions were lost. The actor and movie producer then visited the market and entertained the traders to brighten their faces by causing them to smile and he thereafter donated a whopping sum of one million Naira to the traders.

Zubby was appointed into a political position as the special adviser on media to Willie Obiano, the current governor of Anambra State on the 25th of November 2019. He was awarded a certificate of recognition and honored for his immense contribution to the city radio FM 89.7 youth empowerment scheme in Anambra State, Nigeria. This was made known by the actor through his social media account.