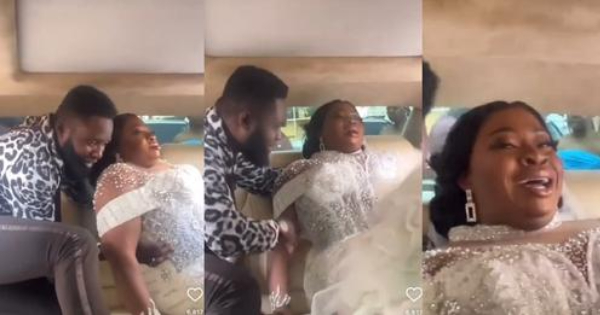 A lighthearted drama ensued after a bride was unable to board the car that was supposed to be taking her to her wedding venue due to her fitted wedding dress.

A trending video on social media captures the painful moment the bride had to be helped into the car because of her corseted wedding dress. 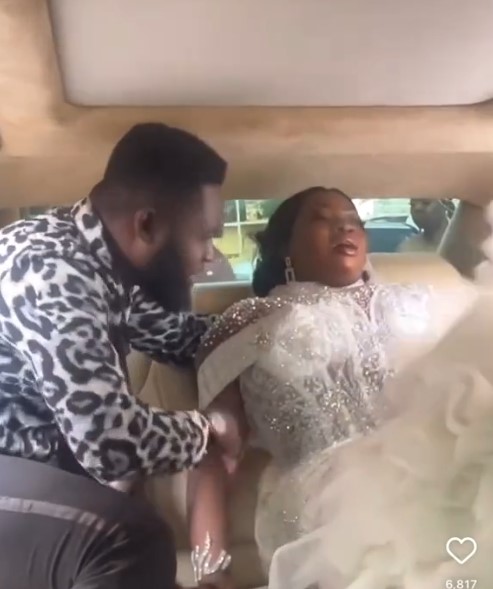 The wedding dress was so tight that she could hardly breathe and move her body with ease.

In the viral clip, a man can be seen pulling the bride into the car while another person helps her get her legs into the car and arrange the extravagant dress.

The trending video was quite chaotic as the team did their best to get her in the car, which they luckily managed to do.

In a piece of related news, a video capturing the moment a wedding guest inappropriately touched a bride during her church wedding has gone viral on the internet.

After the couple was joined in holy matrimony, they stood in front of the altar and their wedding guests came to hug them one by one.

However, in the video captured by a bystander, a female guest was seen touching the bride’s crotch instead of hugging her as other guests did.

Although it’s unclear if the woman did it absent-mindedly, the video has sparked concern from internet users, who wondered why she had to touch the bride’s private part of all places. (Watch Here)